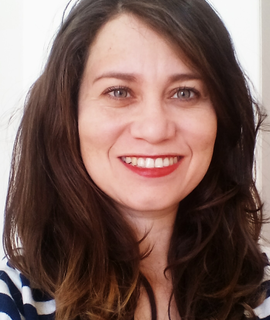 Cyntia de Paula as a degree in Psychology by Universidade Federal do Mato Grosso do Sul – Brazil, and a master degree in Community Psychology by ISPA – Instituto Superior de Psicologia Aplicada.

She is a community psychologist on the immigrants association "Casa do Brasil de Lisboa", where she works in the psychosocial care of migrants, on the orientation and guidance office. She's also the coordinator of the project "Acolhida" and mediator on the group with the same name, a group for sharing migration experiences. She's co-author of several projects on the area of migrants integration in Portugal, and nominee of the association in many platforms.

In the past, she worked in UMAR (União de Mulheres Alternativa e Resposta), as pedagogical coordinator and  technician in the project " "Laboratório para a Igualdade através do Teatro Fórum”.

She is an activist for the migrants rights and feminist.